Thank God for you all being able to help and serve so many people this Thanksgiving. May God bless you.
Thanks, Lamar

One simple act of kindness at the right moment can change the direction of a life and shine a light of hope when all light seems to have gone out. Sometimes it has the power to save a life. This is a concept that permeates throughout the law firm of McIntyre Law. In the past, we have humbly given to multiple charities and our churches. Many of us have volunteered time and money to various local charities never asking for anything in return. However, in a year in which many Oklahomans are hurting from the continued high unemployment rates and families are going without necessities such as food and shelter, we decided that something needed to be done. 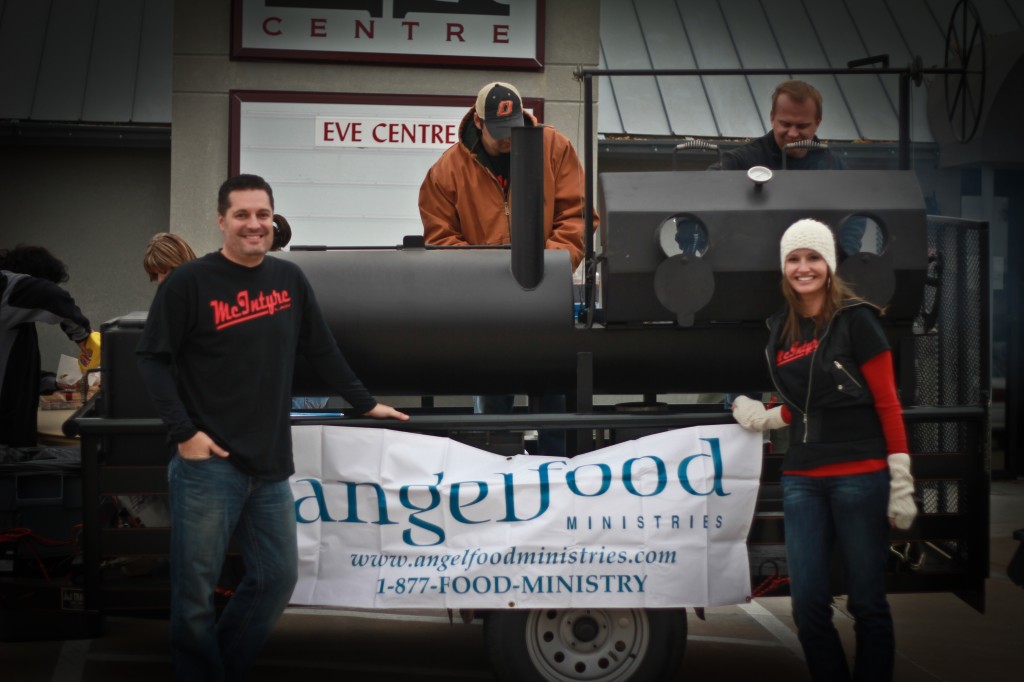 It started several weeks ago when Noble McIntyre, Senior Partner for the Oklahoma City firm McIntyre Law, was going to partner with Angel Food Ministries, to provide a Thanksgiving dinner for a few hundred less fortunate Oklahoma families. Our firm thought that this was a wonderful idea and said we would give what we could. 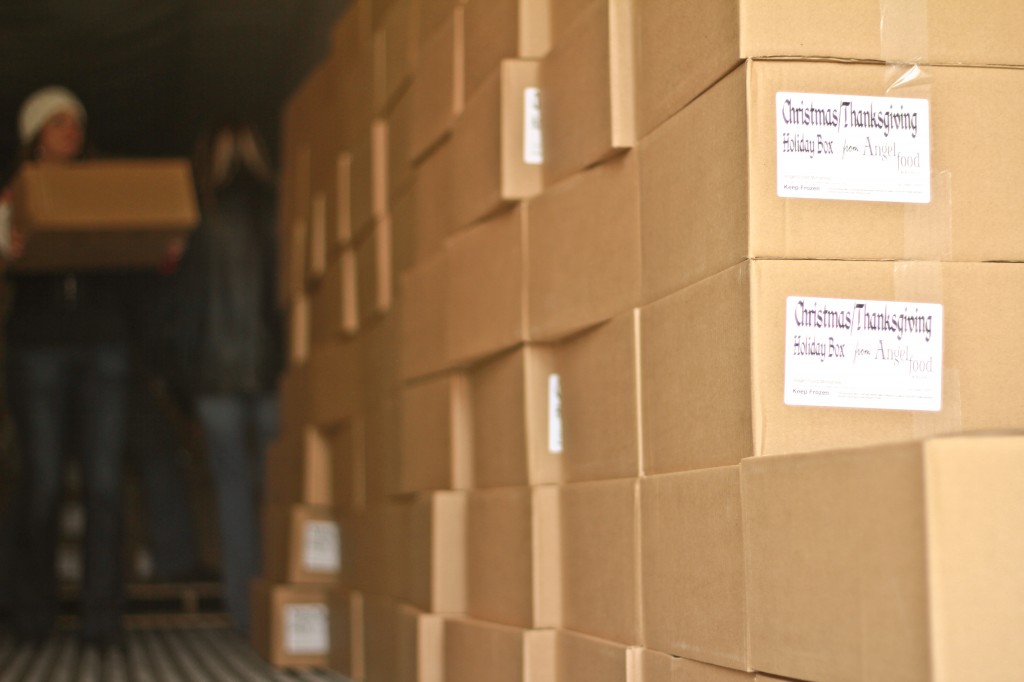 Mr. McIntyre,
I would like to thank you so very much for your generosity. My husband is severely disabled due to strokes (we spoke in the parking lot) and we have been trying to live on just his disability. With this food, we will be able to have our first Thanksgiving in four years.
Again, thank you. You are a very kind person to do this.
Nancy

The initial plan was to provide a few hundred boxes of pre-packaged meals through Angel Food Ministries. However, this plan for a few hundred boxes soon changed after we let our intentions be known to the Oklahoma Association for Justice. Although the public rarely sees it, trial lawyers are some of the most philanthropic and giving people in our communities. They often give humbly with little to no fanfare. Many firms have various charitable organizations they work with during this time of year by giving both financially and in time. However, even with other commitments for these lawyers and firms, we began to get an amazing number of attorneys offering to contribute to the cause. Soon we had financial commitments coming from all over the state that enabled us to purchase over 700 boxes to help needy families in Oklahoma City and Tulsa. 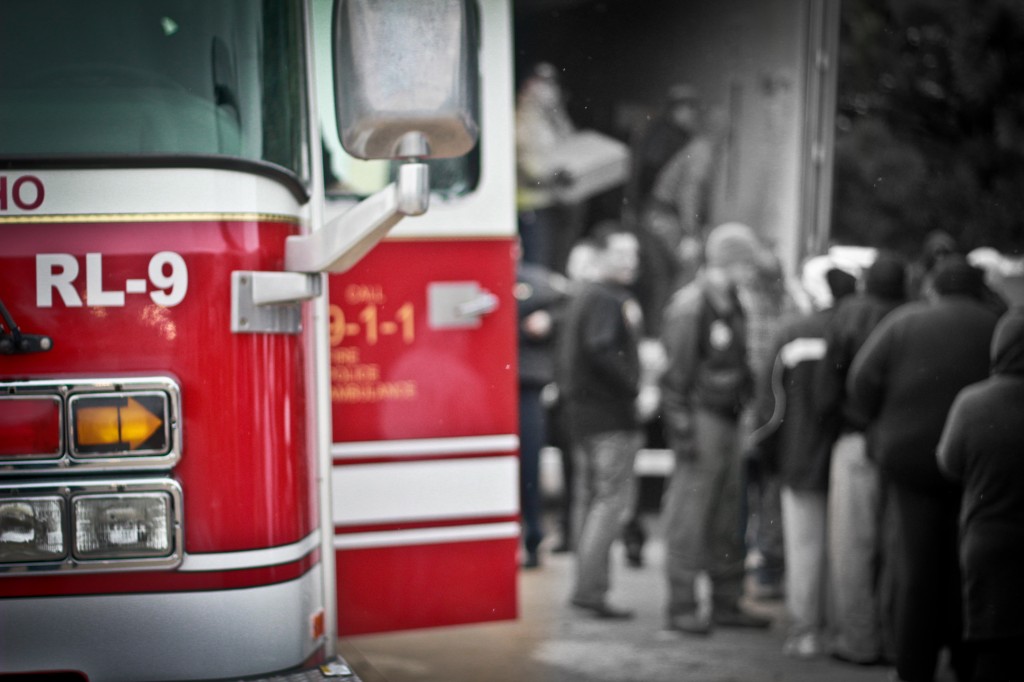 All of a sudden this was turning into a big event. Angel Food Ministries committed a refrigerated tractor-trailer to be at our office on November 17, 2010. We decided we would dispense the food boxes between 3:00 – 6:00 p.m. We also decided to make it an event where we would provide food and drinks to all those who came to get a box. We bought approximately 1000 hot dogs and an equivalent amount of buns. We also bought approximately 1000 drinks. Our staff, families, children, Oklahoma City Firemen from Local 517, Airmen from the United States Air Force and other attorneys volunteered to help with the project. 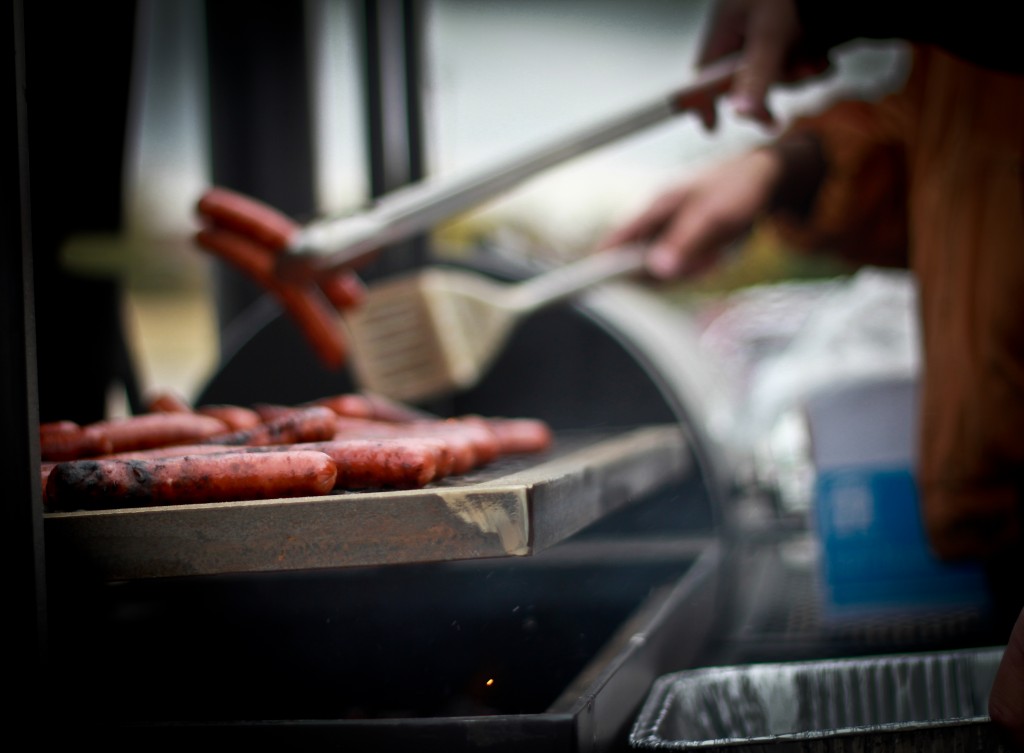 The next big question was whether people would actually come. We announced it on various radio stations and to various civic and church organizations. Still, on the morning of November 17, 2010, we really did not know whether people would come. The weather was getting colder and rain clouds were coming in. 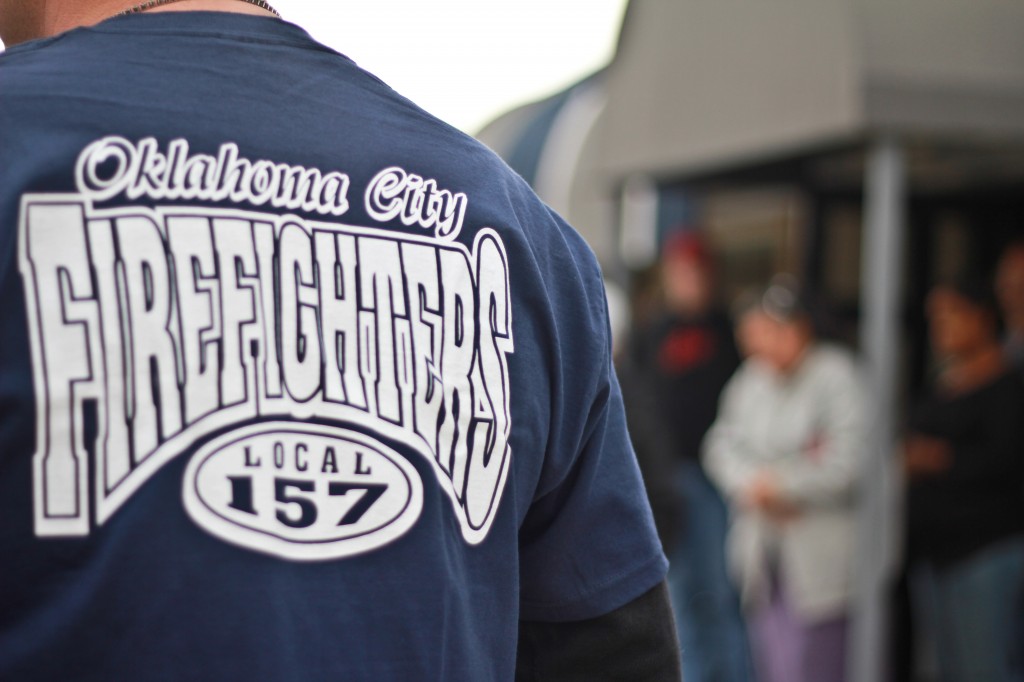 From about 12:00 p.m. to 1:00 p.m. our staff made a few deliveries of food packages to families we knew were in need. When they returned to the office, people already gathering in line. Noble made the choice to move the line inside our convention center area to get the people out of the cold and rain. About the same time we started cooking hotdogs. The crowd continued to grow larger and soon we had the volunteers from the United States Air Force directing traffic and parking. Around 2:15 people started forming a line behind the semi. The line became longer and longer even as the cold and rain moved in. Some people were without coats and even infants were in strollers with little covering from the wind and rain. 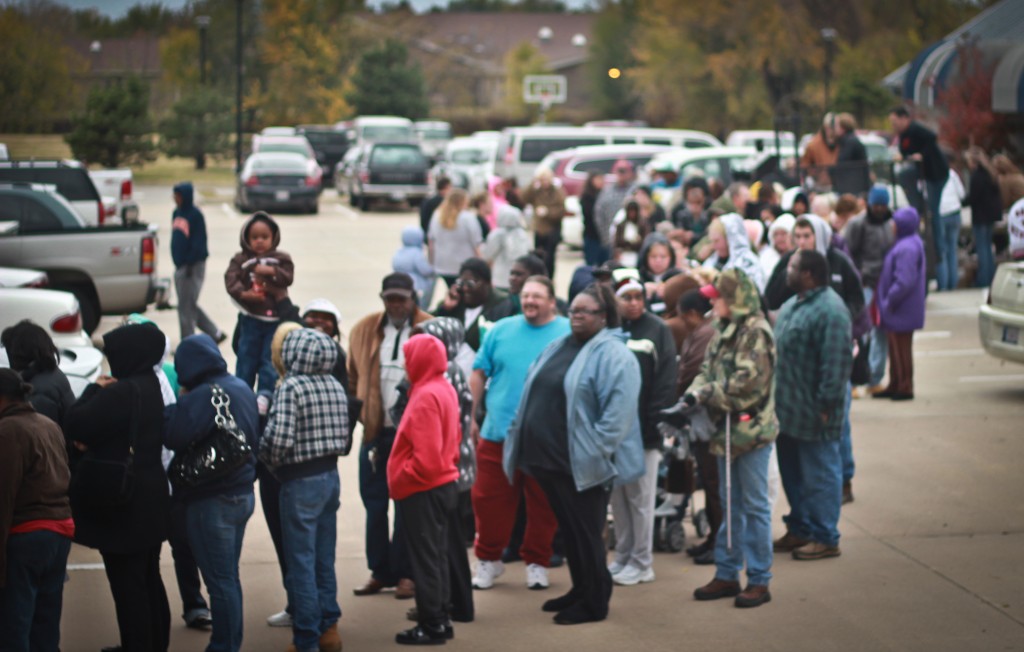 At 3:00 the doors to the semi opened and with the assistance of Oklahoma City’s Firefighter from Local 157 and the USAF Airman, we began dispensing the food to the families. Some of us went and brought boxes to those mothers and fathers carrying young children so that they would not have to wait in line in the bad weather. By 3:45 every box and then some committed to Oklahoma City were gone. We began trying to give away hotdogs and other food items to families who kept coming, but sadly we were unable to fill every need. The hardest thing the volunteers did all day was turn away needy families. 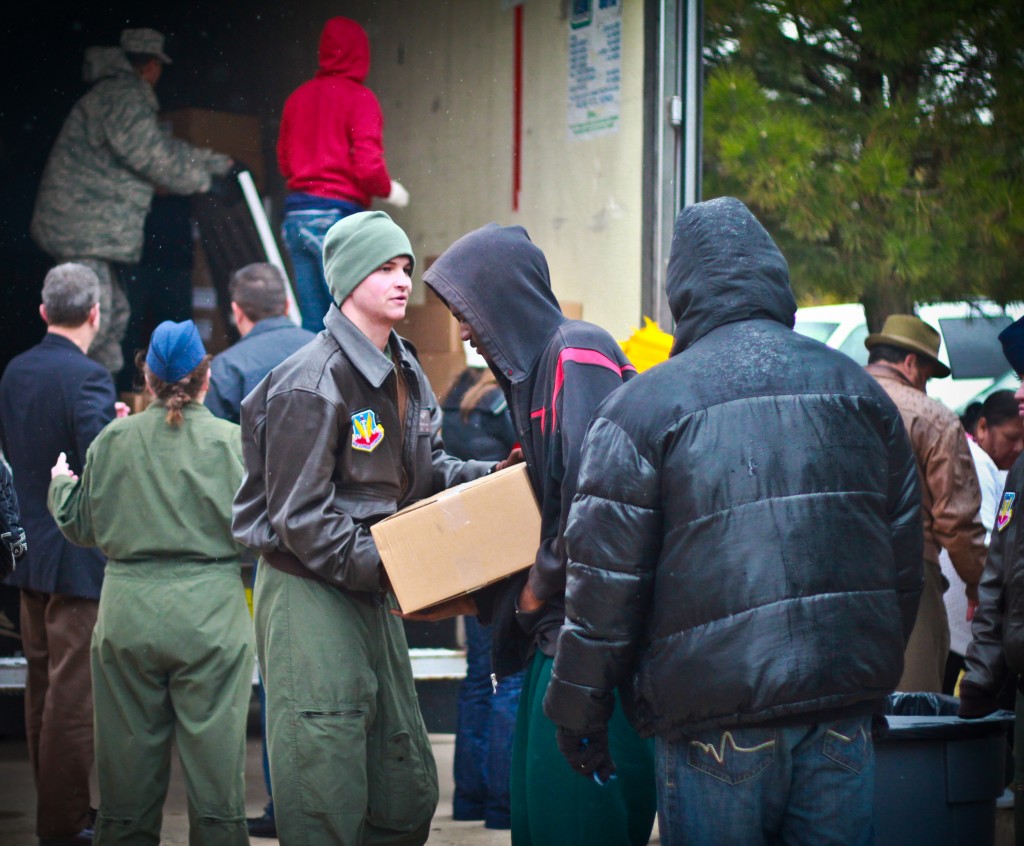 In the end, we gave away over 450 boxes in Oklahoma City alone, feeding approximately 3,000 people. We also delivered over 250 boxes to families in Tulsa, which fed another 1,200 people. We grilled over 600 hot dogs, all of which were consumed, and gave away an estimated 800 beverages. We are very proud to have been able to help 4,200 Oklahomans have a good Thanksgiving, and to have provided so many with meals while they waited. 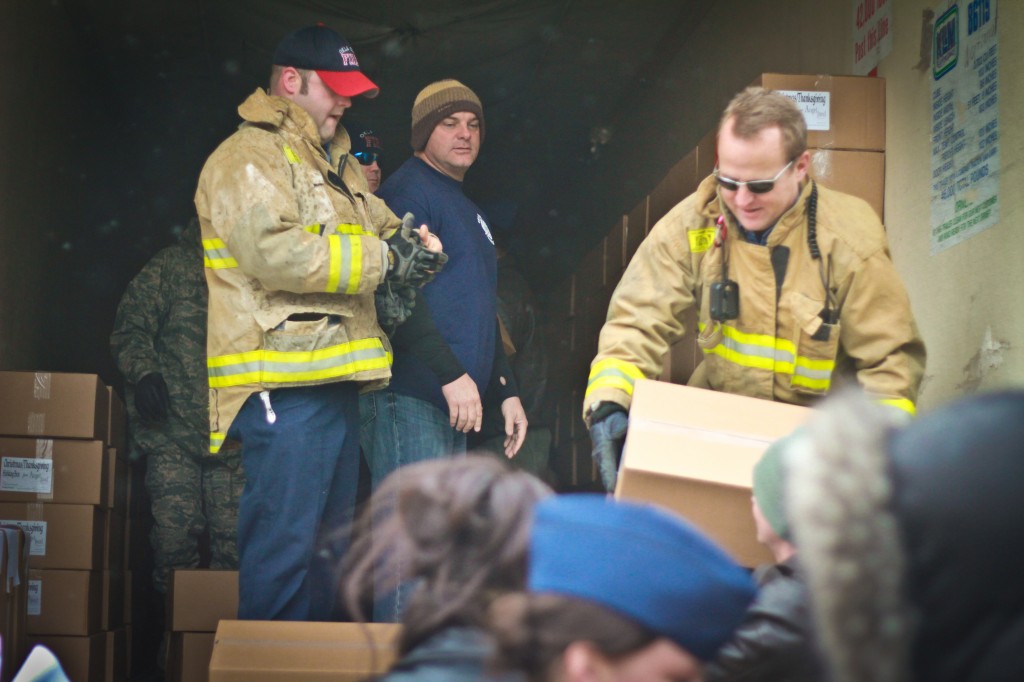 While these numbers sound impressive they are not meant to be that way. Think about it. We fed almost 3,000 people yet had to turn away several needy families. The stories we heard were heart wrenching. People cried, people laughed and people prayed. We received hugs and heartfelt thanks. But at the end the constant sentiment among the volunteers was “I wish we could do more.” 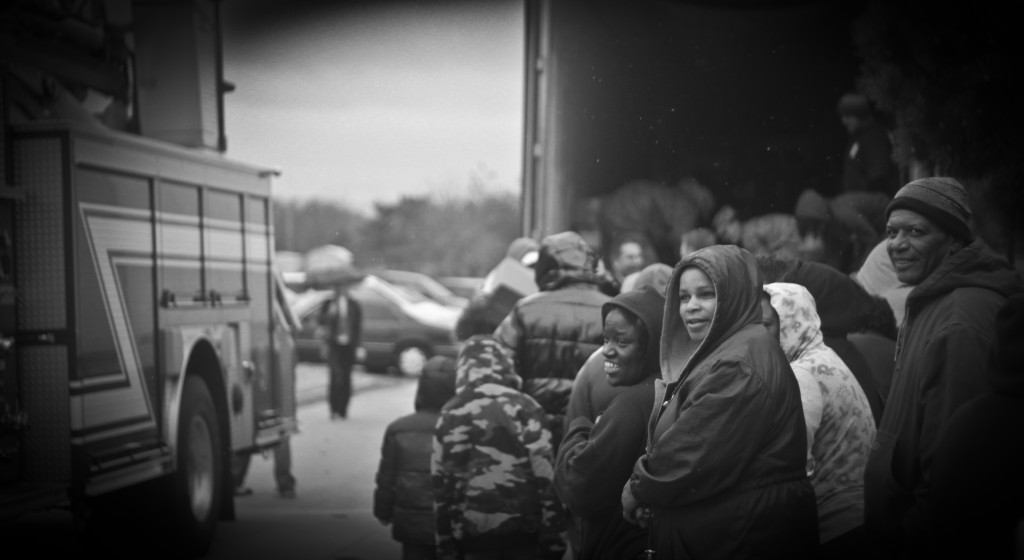 Hi. My name is Julia and I heard about you from a lady at the Master’s Market food pantry in Midwest City. I am married and my daughter and grandson have moved back in with us. I lost my job in July and my husband lost his shortly after.
Thank you for helping with our Thanksgiving.
Julia

Martin Luther King Jr. in his acceptance speech for the 1964 Nobel Peace Prize stated that “[d]eeply etched in the fiber of our religious tradition is the conviction that men are made in the image of God and that they are souls of infinite metaphysical value, the heirs of a legacy of dignity and worth. If we feel this as a profound moral fact, we cannot be content to see men hungry, to see men victimized with starvation and ill health when we have the means to help them.” 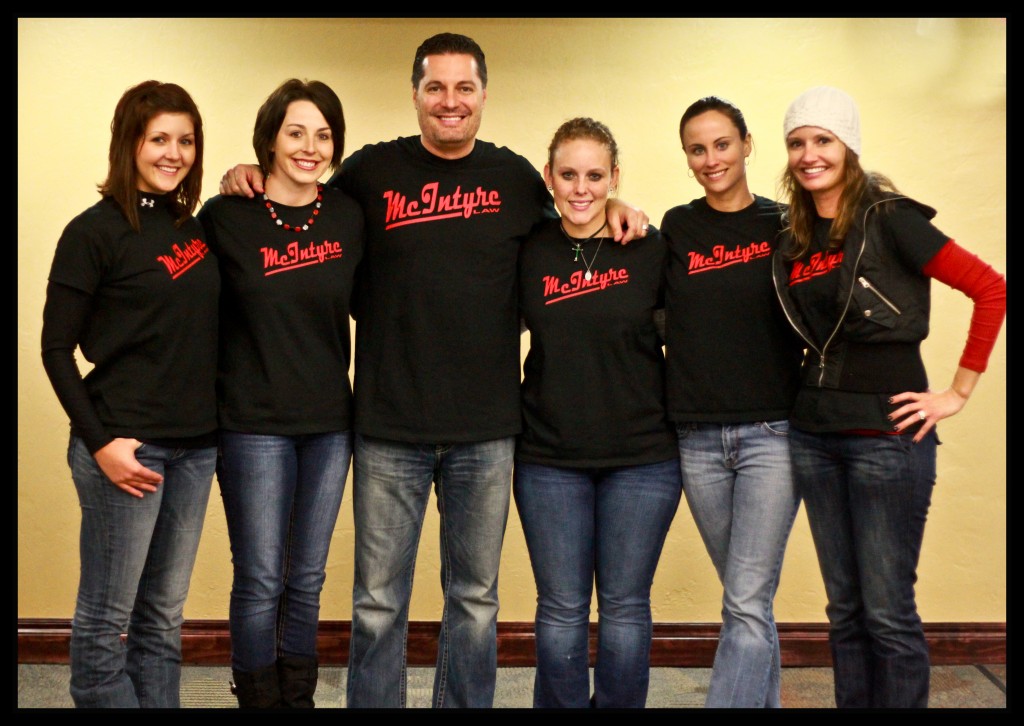 McIntyre Law encourages each and everyone with economic means to put their financial resources and time into helping our neighbors and the less fortunate. Essentially, one box through Angel Food ministries was the equivalent to one McDonalds’ trip for my family. At the end of the day my girls said they could do without McDonalds if it meant helping a needy family. I hope we all can follow their lead.