When something outside the body hits the head with significant force, or when the brain itself is impacted internally as a result of severe whiplash, it can result in traumatic brain injury (TBI). A TBI is a type of acquired brain injury (one that isn’t degenerative, congenital, or hereditary in nature) that is specifically the result of external violence to the head, either through impact (such as a car wreck) or penetration (such as shrapnel or a bullet). TBIs often result in a loss of consciousness at the scene of the accident, which can be dangerous and means additional medical care is needed.

Click a section below to learn more about TBIs:

Unfortunately, many assume that once a person has been sent home, there is nothing else to worry about. This can be a very dangerous assumption, since any significant trauma to the head can have delayed symptoms that are subtle and debilitating, and can last months or even years after the original accident.

Severe symptoms of traumatic brain injury require immediate medical care and can include:

There’s a growing recognition in the United States of the seriousness of brain injuries. For instance, fans of team sports like football have probably noticed how schools and professional leagues have created new rules and protocols dealing with concussions. But it’s worth noting the difference between a concussion and a brain injury.

A traumatic brain injury is any injury to the brain resulting from a blow to the head or body. It can be just an impact, or it can involve penetration of the brain tissue. TBIs range in seriousness from mild to moderate to severe. Symptoms can be anything from headaches, tingling in the hands after hitting the head, or the feeling of pins and needles after a head injury, to permanent brain damage and loss of vision, and can even be deadly. People can experience traumatic brain injury symptoms years later.

A concussion is a type of traumatic brain injury where brain function is affected by a jarring blow or collision to the head or body. The brain is jostled back and forth in the skull, which can damage brain cells and alter brain chemistry. Some refer to a concussion as a mild TBI, though often such a head injury has delayed symptoms too.

The physical forces at work in most automobile accidents create the risk of much more severe brain injury vs. just a concussion.

Identifying the more subtle symptoms of a traumatic brain injury

The immediate signs of traumatic brain injury should be obvious to most people, and if observed, the injured person must consult with a physician as soon as possible. But there are other, more delayed symptoms after a head injury that can be just as important but are often overlooked. These symptoms could indicate long-term problems, like scalp numbness or tingling in hands after hitting your head, that may increase with time. 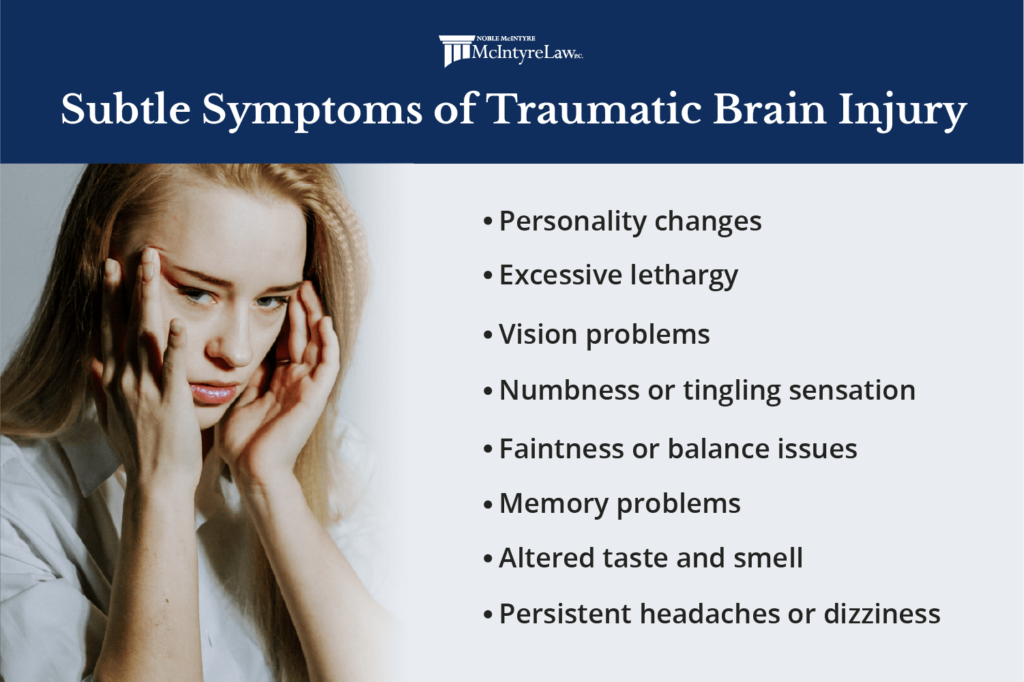 Family members and loved ones should watch out for the following symptoms, which could be indicative of long-term problems from a traumatic head injury:

This is a big one and could be one of the more detrimental long-term symptoms of a head injury. The brain is a very delicate organ and how it’s affected can vary depending on the type of head injury and the specific location of impact. For example, a blow to the frontal region might result in a person being more risk-prone than usual, or having trouble inhibiting certain behaviors that were kept under control prior to the injury.

Other changes could involve the emotions. The person may be less affectionate and more analytical than before. They may exhibit interests and behaviors that would have been foreign to them before the accident. The long-term symptoms of a traumatic brain injury can vary widely. The bottom line is that if the person is different after the accident in terms of behavior, emotional disposition, or general outlook, it warrants a follow-up with a medical professional.

It’s natural for a person to be exhausted immediately after suffering a TBI. But if this general lethargy and exhaustion (mental and/or physical) continues after the body begins to heal, it’s an indication of lingering TBI problems. Changes in sleep patterns are especially important in determining these sorts of aftereffects. Sluggishness and general apathy are also indicators of potential long-term problems.

This symptom of a brain injury can be acute or subtle. Badly blurred vision after an accident is an obvious sign of a problem and will usually be noted soon after the car accident or other head trauma. Subtle vision changes are often ignored by the patient but may actually be a sign of acute long-term problems from a head injury. If the person has trouble reading up close or has more limited long-range vision, it could be a direct result of the head injury. Field-of-vision problems should be addressed immediately due to related problems they may cause, like increased susceptibility to accidents.

Numbness or tingling after head injury

After a head trauma, there may be lingering scalp numbness or sensation of pins and needles in certain areas of the body. This can be a symptom of a nerve disorder, or it could be related to actual damage to certain areas of the brain. These pins and needles after hitting your head often occur predominantly on one side of the body due to the way the brain splits control of the nervous system between hemispheres.

After a head injury, some memory problems are to be expected. But when they linger past the normal recovery period, it could be an indication of a more substantive injury than originally diagnosed. Forgetfulness, inability to recall names or places, worsened short-term recall, etc. are symptoms of traumatic brain injury. All of these can be signs of potential long-term damage to the brain’s ability to process and retain information.

The olfactory organs are very sensitive and can easily be damaged by moderate head trauma. The symptoms may not be obvious at first. But over time, the person may note changes in tastes or smells. There are many possible causes for these problems, and it takes a thorough medical examination to determine the underlying problem and whether it’s treatable.

You would naturally be on the lookout for pain in the head or other related conditions immediately after a blow to the head, but headaches and dizziness can be common enough and caused by such a wide variety of things that it might be easy to dismiss as something less serious. Numbness in the head after an injury, dizziness, and/or headaches could indicate a change in the brain, nerve damage, or damage to the brainstem caused by the injury.

Although we have much still to learn about how the brain works, medical science has made great strides, especially in the past few years. Educating yourself about the signs of traumatic brain injury after an accident — and what to do if you see them — could make all the difference in your or your loved one’s recovery after a TBI.

Can you have a brain injury and not know it?

Yes. Although some symptoms may be noticed immediately, there are some head injury delayed symptoms that may not be apparent for days or even weeks after the accident.

When should I get medical treatment for a head injury?

If you’ve experienced a head injury, you should get medical treatment right away. If you were seen by a doctor after the accident but were discharged, it’s still possible that you’ll suffer delayed symptoms after the head injury. It’s best to get to a doctor as soon as possible if you spot the subtle signs of traumatic brain injury, or even if you’re just concerned about the severity of the blow to the head. Treatment for traumatic head injuries can range from pain medication and rest to brain surgery and extensive rehabilitation.

How long does it take to recover from a traumatic brain injury?

Recovery time after a traumatic brain injury depends on its severity. A concussion may require two to three weeks before symptoms go away. More severe traumatic brain injuries can mean months or years of rehab to regain lost brain function. Even so, full recovery isn’t always possible.

According to the Model Systems Knowledge Translation Center (MSKTC), a national research center that deals extensively with traumatic brain injury, at two years after a moderate or severe TBI, about 30% of people need some assistance from another person in their daily lives. Victims often still have trouble thinking, and about 25% experience depression. Roughly 50% can drive again, although maybe not as often or in the same way as they did before. Only 30% have a job, though not necessarily the same one they had before the TBI. Again, those statistics apply to victims who are two years into recovery, so further recovery is still possible, but it shows just how much time and work is necessary.

Can the brain heal itself after trauma?

Yes, the brain can heal itself to an extent, but it depends on the severity of the traumatic brain injury. For minor TBIs, rest may be enough. However, more severe TBIs may require extensive rehabilitation and therapy to aid the process, although full recovery is not guaranteed. Healthy behaviors, such as avoiding alcohol and drugs, also factor into the brain’s ability to heal. How quickly a TBI is diagnosed and then treated is also important.

Any accident resulting in head trauma requires medical attention. You can still suffer traumatic brain injury symptoms years later, which can be extremely debilitating. The best asset for recovery is a good friend or family member who can help watch for lingering signs of traumatic brain injury that the injured person may be unable to identify on their own.

If you know someone who has experienced a head trauma due to an accident, be sure to seek medical attention right away as well as the services of a top brain injury lawyer. It can take months or even years of expensive medical treatments and therapy to recover from a TBI. A skilled traumatic brain injury lawyer can help you get the compensation you deserve to cover the cost of past and ongoing treatment. If the road to recovery after a TBI is a long one, don’t let money worries be one more obstacle to overcome.