Is there currently a knee replacement class-action lawsuit?

There is no class-action knee replacement lawsuit. However, multidistrict litigation over faulty knee replacements involving the Zimmer NexGen Knee Implant is ongoing. If you are suffering from a faulty knee replacement, you have the right to file a lawsuit. At McIntyre Law, we help people all over the country do just that. These knee replacement problems are a national problem—no matter where you live in the United States, we’re ready to help. We’re based in America’s heartland and serve all our clients as if they were right around the corner. You can call our founder Noble McIntyre anytime to talk about your case.

What to Know Before you File a Lawsuit

People who win compensation for suffering and medical expenses almost always have a lawyer working for them. That’s because going up against the legal experts from the big medical companies takes years of training. Hiring McIntyre Law levels the playing field. We’ll also help you acquire the medical records you’ll need to file your suit, such as the date of your initial surgery, if there was a revision surgery, where your knee replacement took place, and the type of knee implant you have.

When a lawyer works on a “contingency fee” basis, they’re agreeing to accept a fixed percentage of any monetary rewards from your lawsuit to cover their legal fees. If there are no rewards from your knee replacement lawsuit, you don’t pay the lawyer. We get paid if, and only if, you do.

The Statute of Limitations for Knee Replacement Lawsuits

If you wait too long to file your knee replacement lawsuit, you may lose your right to do so. Every state has different filing deadlines, which depend on when you started to feel the symptoms of your faulty knee replacement. Our advice? Talk to a lawyer as soon as possible. They can help you document your experience and match it with your specific state to determine if you’re eligible.

What compensation can I get from a knee replacement lawsuit?

At McIntyre Law, we’ve seen the suffering that faulty knee replacement patients endure. We believe in holding companies responsible when they make faulty products. We want to see victims of these faulty products get full compensation for their pain, medical expenses, lost wages, and lost quality of life.

Do you have a case for a knee replacement lawsuit?

If you had a knee replacement, and you’re now experiencing extreme discomfort, you may have a case for a knee replacement lawsuit. If you aren’t sure whether you’re eligible, give us a call. We’re here to help—and we won’t charge one single penny for your consultation. If you do have a case, we’ll start working tirelessly to get you the compensation you deserve.

You don’t have to suffer alone. Let us fight for fair compensation for your medical bills and suffering.

Knee implants replace the weight-bearing surfaces of the knee joint in patients, with the goal of relieving chronic pain and disability. The different types of knee-replacement implants are: 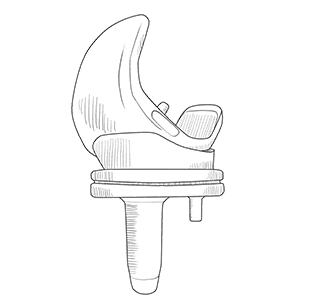 Mobile-Bearing Prosthesis:
Allow for slightly more rotation than fixed-bearing prosthesis. Soft tissues must be strong enough to support this option, or knee dislocation is possible. These implants typically last longer and allow for more active lifestyles, but the surgery is more challenging.

Posterior Cruciate Ligament-Retaining:
The PCL is the ligament that runs along the back of your knee. These implants allow the doctor to keep your PCL intact, giving you a greater range of motion.

Posterior Stabilized:
If this implant is used, the PCL is removed, and the implant serves as the stabilization for the back of your leg, keeping your thigh bone from going too far forward when you bend your knee.

Gender-specific:
Knee implants were once unisex, but manufacturers have developed components that are thought to fit better with the average woman’s knee. However, your surgeon should be choosing your implant based on your unique anatomy.

The Oxinium Genesis II and Profix II were recalled because of a higher than expected number of follow-up operations.

The FDA ordered a recall when packaging of some femoral components were incorrectly labeled as either smaller or larger and/or as the incorrect side.

Knee Replacement Complications and Side Effects

Complications from knee replacement surgery can occur on the operating table, years later due to wear and tear, or suddenly, because of a traumatic event.

Certain complications from knee replacement surgery are very common. These include:

Severe and serious complications resulting from knee replacement surgery with a faulty implant may be grounds for a lawsuit. These include:

Knee implant manufacturers have had to recall their faulty products multiple times. There have been more than 500 different knee implant components recalled. If you’re wondering if your knee replacement has recalled parts, contact McIntyre Law or visit the FDA recall list to find your device.

Knee Replacements and the FDA

The FDA is responsible for deciding whether knee replacement implants are safe.

The Miller-Galante total knee, among the first knee replacements designed for use with cement or cementless fixation, is first implanted.

Four artificial joint makers agree to pay more than $300 million in penalties after being accused of violating anti-kickback laws.

Case against Zimmer regarding knee replacements is thrown out by the court.

First US lawsuit filed regarding a premature failure of the DePuy Synthes' Attune Knee System.

Zimmer announced a settlement in the remaining lawsuits. The exact amount of the settlement is unknown.

Many of the more than 1,700 lawsuits in the MDL were dismissed.

How did knee implants get approved by the FDA?

The first knee replacement implants were proposed in the 1880s, when a German surgeon suggested that ivory implants held in place with cement could replace damaged knee joints.

Modern knee replacement research picked up in the 1950s, with the development of replacement joints using metallic components. In the 1970s, researchers first debut knee replacements that allowed for the preservation of the posterior and anterior cruciate ligaments.

Recent innovations in knee replacement implants have focused on allowing for greater range of motion, so that younger patients can stay more active.