Is there currently a class-action Biomet hip replacement lawsuit?

McIntyre Law is an Oklahoma-based legal firm that’s currently litigating these types of Biomet lawsuits. Although we’re located in the U.S. heartland, our legal knowledge, expertise, and professional reach extend across all fifty states. We believe the best way to win lawsuits is to build close relationships with our clients. Every victim’s situation is different, and it’s our job to get to know yours. That’s why our founder, Noble McIntyre, is available to answer any of your questions or talk about your case.

Anyone considering a Biomet lawsuit needs to consult a legal professional. To properly prepare a legal case, you need to gather your medical records and file necessary court documents. At McIntyre Law, we can help you file court petitions and serve summons to defendants to appear in court. All of this investigation and organization can overwhelm victims who try and handle their own case.

If you’re a victim of a defective MoM hip replacement, you have enough on your plate, and the physical and emotional pain can make it difficult to effectively prepare your own case. That’s why it’s smart to hire a legal team to do the heavy legal lifting. With professional Biomet attorneys by your side, you can level the playing field against large corporations with enormous financial and legal resources. Bringing your own legal team to court substantially improves your chances of getting compensation for your damages.

When a lawyer works on a “contingency fee” basis, they’re agreeing to accept a fixed percentage of any monetary rewards from your lawsuit to cover their legal fees. If there are no rewards from the case, you don’t pay the lawyer.

The Statute of Limitations for Biomet Hip Replacement Lawsuits

You should start your Biomet lawsuit as soon as you suspect you’re suffering complications from one of their defective devices. The deadline to file your lawsuit could be getting closer than you think. Statutes of limitations differ depending on where you live. In most states, it’s one or two years from the time you know (or should have known) about your injuries. But to be sure, it’s best to contact an attorney who can find your specific model of hip replacement implant, check your state’s statutes, and legally document when you first discovered your symptoms. Your suffering doesn’t have a timeline, but your Biomet lawsuit does.

What compensation can I get from a Biomet hip replacement lawsuit?

The types of compensation you can receive from a Biomet lawsuit depends on your specific situation and where you live. An attorney will be able to explain your situation after they’ve reviewed your claims. They will also be able to fully present your specific case, which is crucial to getting every dime of compensation you’re entitled to. McIntyre Law makes sure all of your damages are accurately and thoroughly represented in court. Here are some types of compensation courts are awarding victims of MoM hip implants:

At McIntyre Law we care about getting justice for every victim of a defective Biomet hip replacement. Cash settlements and court awards help our clients repair the damage done to their bodies and lives. They also send powerful messages to big corporations who put profit over the safety of patients or try to avoid responsibility for their defective products. So, winning your case is a win for all victims. When you work with McIntyre Law, you’re getting an experienced, committed team of legal professionals who always put you and your Biomet lawsuit first.

Do you have a case for a Biomet hip replacement lawsuit?

Anyone who has received a Biomet M2a system hip replacement and experienced complications is a good candidate for a Biomet lawsuit. There are thousands of cases across the country still pending, and it’s never a waste of time to talk with an attorney about your situation. Firms like McIntyre Law who work on a contingency fee basis will only take your case if they think you have a good chance to win. Plus, they have the knowledge and skills to get your lawsuit started before the statute of limitations runs out.

We’re currently litigating Biomet lawsuits. Let us add yours to our list of cases won.

Biomet produces a number of hip replacement and resurfacing products, including femoral heads, acetabular shells, and liners. However, the two components currently subject to multidistrict litigation are the company’s M2a Magnum femoral head and the M2a Acetabular shell. Both are components of a metal-on-metal hip implant, a device type connected with complications like metallosis (metal poisoning) or necrosis (dead tissue). These components can cause serious medical conditions that can require hip revision surgery:

M2a Magnum
The Biomet M2a Magnum has a large metal femoral head made from an alloy of cobalt, chromium, and molybdenum. The device is intended for non-cemented hip replacements and revision procedures. In addition to metallosis, other complications with the M2a Magnum include inadequate positioning, loosening, fracture of the head, and joint dislocation.

Biomet is only one of several MoM hip implant manufacturers facing multidistrict litigation for defective devices. You may still be eligible to file a lawsuit if your hip implant was manufactured by any of these other companies.

The M2a systems are metal-on-metal construction that use metal alloys designed for strength and durability. But these devices aren’t perfect. Aside from fracturing, dislocating, or completely failing, MoM hip implants can also lead to a host of other side effects and complications. As the metal surfaces grind against one another over time, small flakes and metallic ions can be released into the surrounding tissue and bloodstream. This can cause metallosis, metal poisoning, and/or death of the tissues and bone surrounding the implant. Complications and side-effects from a failing Biomet hip symptoms include: 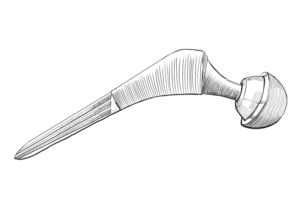 Since 2001, Biomet has recalled two orthopedic implants due to high fracture rates and mislabeling of sizes.

Despite thousands of lawsuits and patient complaints to the FDA, Biomet has yet to issue similar recalls for either the M2a Magnum or M2a Acetabular systems.

Biomet Hip Replacements and the FDA

So far, the FDA has overseen only two major Biomet recalls since 2001. However, more are expected as more patients report side effects from their M2a system MoM hip implants.

(March) Zimmer Biomet to pay $22 million in a knee injury case in Pennsylvania.

How did Biomet hip implants get approved by the FDA?

In 2001, Biomet faced its first major recall of its hip implants after the FDA required eight companies using the French-made zirconia ceramic femoral heads to pull their products from the market. Later, the company moved from ceramic heads to metal-on-metal construction with the approval of the M2a Magnum in 2006. But after the FDA became aware of the potential hazards from MoM devices, the company became the focus of multidistrict litigation in 2012. Two years later, Biomet paid $56 million to settle thousands of lawsuits by victims who were harmed by the M2a systems. Some of these cases are still unresolved as other victims continue to seek justice and compensation. Neither the FDA nor Biomet has yet to recall any of these M2a devices.