How to Report a Car Accident to the Police

If you get into a severe auto wreck, you’ll quickly be put into a situation that requires important decision-making, like calling emergency services. And you’ll have to take action at a time when you may be in shock and full of adrenaline.

Here, we’ll go through how to report an accident to the police, what happens if you don’t report a car accident, how long it takes to get a police report after an accident, and more important tips for successfully working with law enforcement to improve your case.

Calling police to the scene

After a traffic accident, it’s important to record what happened, where, and who was involved. Even if you think the car wreck was too minor to involve the police or auto insurance, property damage and personal injuries aren’t always obvious right away.

If you or the other driver has a change of heart, it could mean an insurance investigation or even a lawsuit. For instance, if the other driver caused the collision, how do you prove you are not at fault in the car accident? In Oklahoma, the at-fault driver and their insurer are responsible for paying for damages, so the final judgment could be costly.

That’s where police reports can play a vital role in car accident investigation procedure. They provide the necessary facts from an unbiased third party (the police) that carry significant weight with insurance companies. 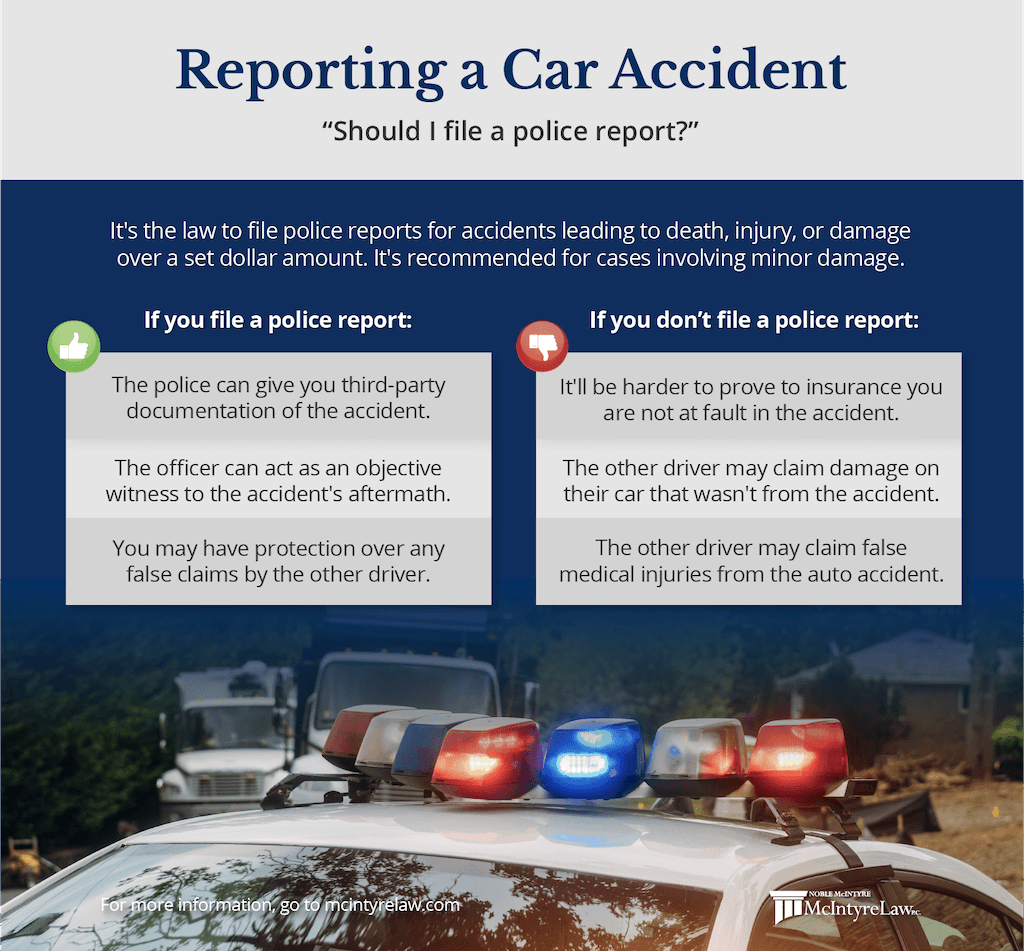 The police have many important duties to perform once they arrive at the accident scene, starting by providing safety and establishing order. Law enforcement officers typically go by the following car accident investigation procedure:

Do you have to call the police after a minor car accident in Oklahoma?

Typically, you do not have to call the police after a minor car accident if all of the following is true:

Every state has a different property damage dollar amount minimum that requires the presence of law enforcement. In Oklahoma, you must call the police if there was $300 or more in damages.

Still, even though you don’t have to call the police after a minor car accident, that doesn’t mean you shouldn’t. What can happen if you don’t call the police after an accident? Well, if you or the other driver has delayed injuries or discovers damage that wasn’t noticed at the accident scene, insurance may come into play. And a big part of how you prove you are not at fault in a car accident is by collecting your own evidence and making sure there’s an official record of what happened in the form of a police report.

Filing an accident report in Oklahoma

If anyone was killed or injured, or there was more than $300 of property damage, it’s legally required to contact the police in Oklahoma. It’s also necessary to file an accident report in Oklahoma if a settlement hasn’t been reached on such a traffic accident within six months.

The best way to file an accident report in Oklahoma is to call the police to the accident scene. The simplest way to do so is to dial 911. In Oklahoma City, you can also contact the Oklahoma City Police Department for non-emergencies at 405-231-2121.

When law enforcement arrives, cooperate fully, answer the officer’s questions, and don’t forget to get the officer’s name and badge number along with the police report identification number. It may take a few weeks before your police report becomes available, and you may have to pay a small fee. In Oklahoma, it’s $7 for a collision report and $10 for a certified collision report.

Can you file a police report days after an accident?

Oklahoma law says drivers who get into accidents involving death, injury, or property damage exceeding $300 must contact the police “immediately, by the quickest means of communication.” The officer on the scene will collect information for the official report.

If the accident only involves property damage, the police department may not dispatch an officer to the scene. In cases where the police don’t show up, you can file a police report days after the accident. If that happens, exchange information with the other driver(s), collect evidence, and gather witness statements on your own. You must then file your own report with the Oklahoma Department of Public Safety.

Tips on how to report an accident to the police

Following a few rules of thumb can help you make sure the police create a thorough report that can strengthen your case with an insurance company.

Are police reports available to the public?

Police reports are available to the public, but not right away. How long it takes to get a police report after an accident varies, but it can be weeks. You’ll need to contact the police department who responded to the scene. In Oklahoma City, you’d contact the Records Unit. You can also make a records request through the Oklahoma Department of Public Safety.

Once you obtain the police report, carefully review it. If you collected your own evidence and witness statements, you may find factual discrepancies between your findings and those of the responding officer. If you’ve been documenting your accident, you can contact the investigating officer and request a revision.

What’s more, the officer at the scene often offers their opinion of who was at fault in the auto wreck. If they concluded that you were at fault in the car accident, though, you may be able to dispute the police report.

Disputing fault in a traffic accident in Oklahoma

When you receive your police report, you may be surprised to learn that the attending officer concluded that you were at fault in your traffic accident. Law enforcement officers are trained to try to stay as unbiased as possible as they collect evidence and statements at the scene of the wreck, so unless the case is fairly obvious (like a single-car collision with a tree or pole), you won’t be able to tell for sure what they concluded until you see their final report.

When insurance companies try to determine fault in automobile accidents, they rely very heavily on official documents like police reports. Unlike the drivers involved, the responding officer has no incentive to judge one way or the other, so if the police report says you’re at fault, the other driver’s insurance company is likely to deny your claim against their customer.

If the police report for your traffic accident says you’re at fault, it’s difficult to get the document changed. But you may be able to contact the officer who wrote it and dispute their conclusion by adding information you provide.

How to correct a factual error in a police report

If there are factual errors in your collision report, you may be able to get those mistakes corrected by contacting the police officer who authored the report and providing them documents that reveal the correct information. These kinds of mistakes can be recording errors, like the wrong time of day or license number, or it could be misrepresentation of your personal injuries. If you have developed new medical problems or you’re still in pain, you can present the medical records you saved after the accident to support your case.

Disputing the officer’s opinions or conclusions is more difficult. The police officer or department may allow you to add additional testimony that supports your case, but there’s no guarantee of that.

If you are allowed to make a supplemental statement, its effectiveness will hinge on how well you documented your traffic accident and the aftermath. You can include the following as supporting documentation:

Get the compensation you deserve for your injuries

There’s so much to do after a car accident, from getting your car fixed to dealing with auto insurance investigations to worrying about lost wages, and all at a time when you may be healing from personal injuries and are facing long-term pain. That’s why it makes sense to contact an experienced personal injury lawyer.

The attorneys at McIntyre Law have worked extensively on car wrecks, motorcycle accidents, and even collisions involving tractor-trailers. We know what you’re going through, and we can help. McIntyre will work tirelessly to get you the financial security you’ll need to move forward with your life.

Learn what else you should do after a car accident