McIntyre Law, P.C., recently performed a study which compiled and examined drunk driving accident statistics gathered from the Oklahoma Highway Safety Office (OHSO), the National Highway Safety Administration (NHTSA), and the Fatality Analysis Reporting System (FARS). Statewide findings were encouraging, while some of the county-specific data was disturbing. The number of alcohol-related car accidents rose steadily between 2005 and 2008, but fatalities dropped dramatically from 2008 to 2009. Sadly, Oklahoma and Tulsa counties once again saw the highest number of drunk driving fatalities over the last five years. Stephens County had the greatest increase in alcohol-related fatalities from 2008 to 2009. Conversely, Sequoyah and Marshall counties had the greatest decreases during the same period.

Overall in Oklahoma, drunk driving accidents have increased since 2005. The state must do more to raise public awareness about the devastation caused by drunk driving.

In addition, the number of Oklahoma drunk driving accidents has remained fairly consistent during the last five years, while alcohol-related injuries have risen. 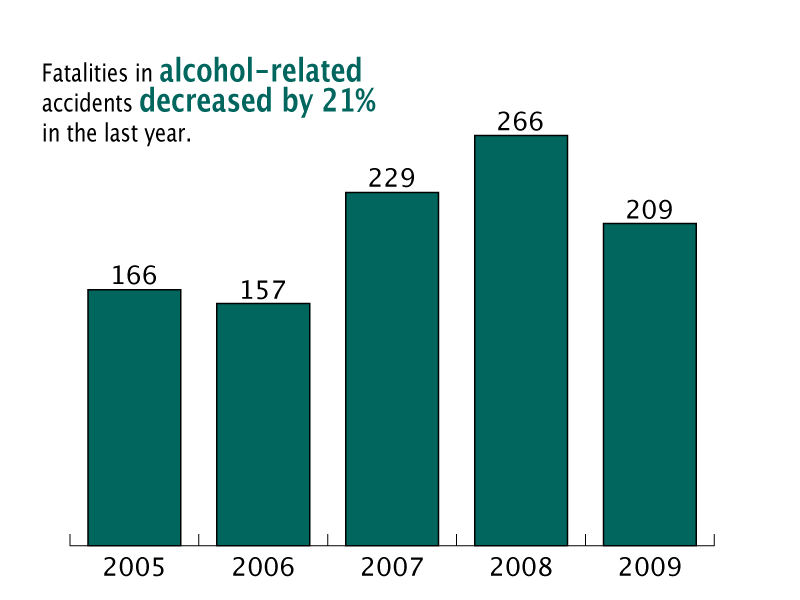 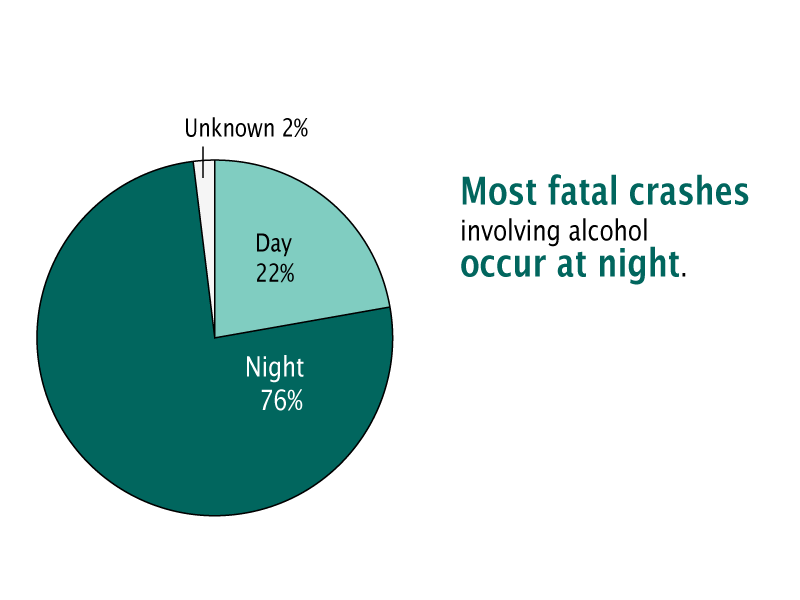 Drunk driving statistics indicate that in accidents with alcohol-impaired drivers, three times as many deaths occur at night than during the day.

Males vs. Females in Alcohol-Related Crashes, 2009 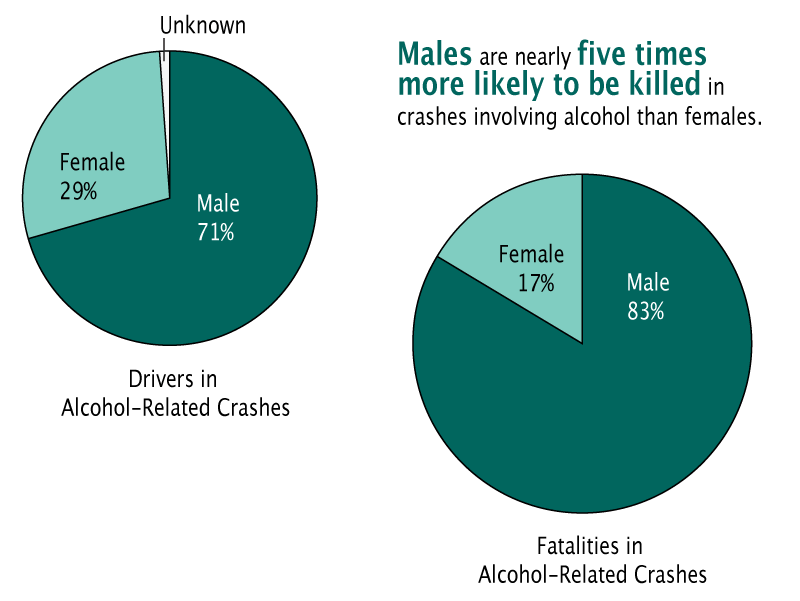 Men are almost five times more likely than women to be killed in accidents with alcohol-impaired drivers. 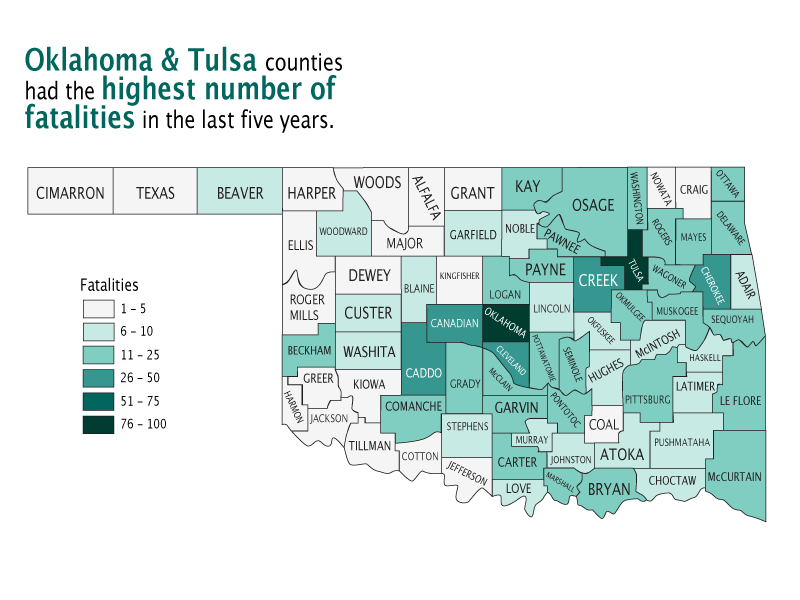 Of the ten counties with the highest numbers of alcohol-related fatalities from 2005 to 2009, Oklahoma County comes in first with 106 deaths. This is an increase of 21% over the entire period, but a drop of 12% between 2008 and 2009. Oklahoma was the deadliest county last year as well. The second-deadliest county was Tulsa with 96 deaths, an increase of 65% over the five-year period, and a decrease of 25% from 2008 to 2009. The least deadly county was Harmon with no drunk driving fatalities in the last five years.

Fatalities in Alcohol-Related Crashes by Population, 2005 – 2009 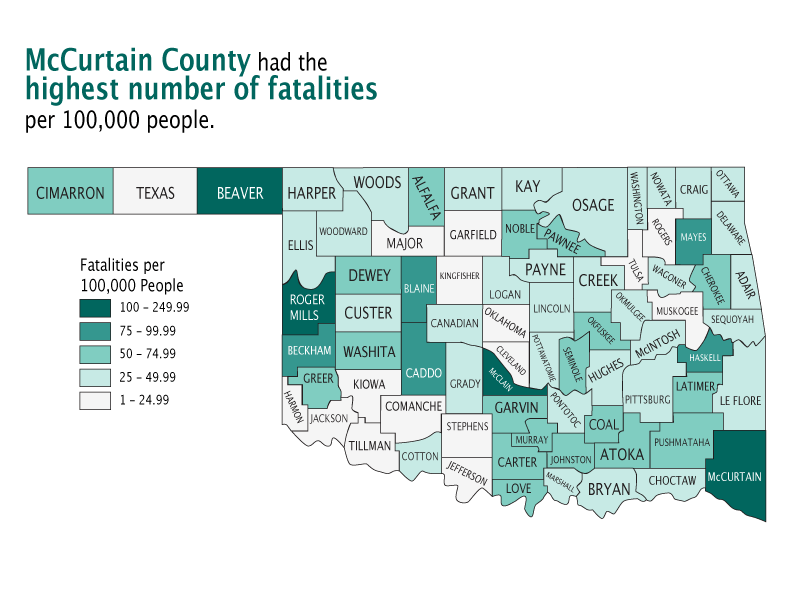 *Population is from 2000 census data.

*Population is from 2000 census data.

When looking at drunk driving statistics in Oklahoma, it’s important to bear in mind population density varies from county to county. Harmon is the only county with a fatality rate of zero over the last five years, so population is irrelevant. However, Jefferson County had roughly twice the fatality rate of Kingfisher County, yet both counties had just one actual death each. Oklahoma, Tulsa, and Cleveland counties had the highest rates of drunk driving fatalities, but those numbers were also offset by those counties being the most densely populated.

Increases and Decreases in Alcohol-Related Fatalities by County, 2008 – 2009 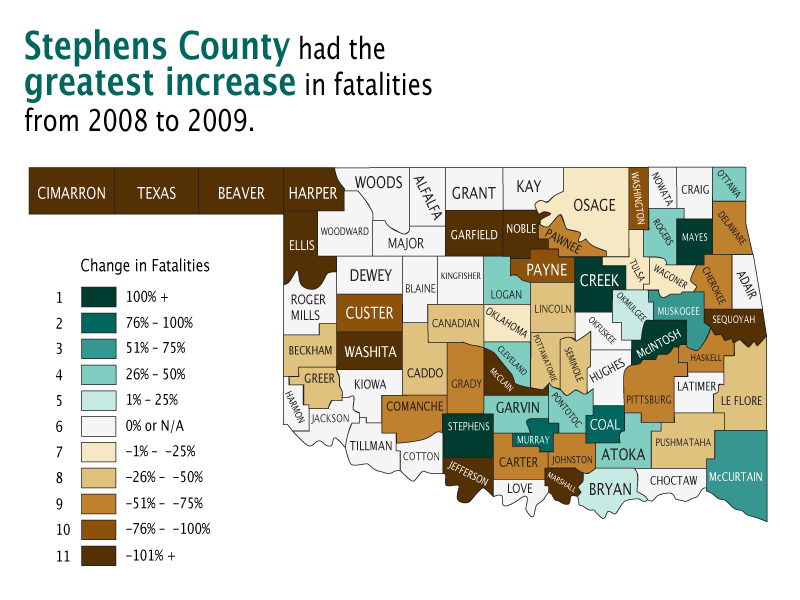 While Murray and Coal counties each had just one death more in 2009, this accounts for a 100% increase in alcohol-related traffic fatalities, a disturbing figure. Even more disturbing, though, is the 300% increase in Stephens County, the greatest increase in drunk driving fatalities between 2008 and 2009 of all the counties in the state.

Meanwhile, Sequoyah had the greatest decrease in deaths resulting from drunk driving accidents, dropping from seven fatalities in 2008 to none in 2009. Ten other counties saw their actual fatality numbers drop to zero in the same time period.

Part of McIntyre Law’s mission is to help protect the rights of Oklahoma car accident victims. If you or someone you love has been injured in a drunk driving accident, contact personal injury attorneys at our firm for a free consultation.