Driving under the influence (DUI) is a problem everywhere, and it’s not a new concern. While DUI continues to cause injuries and fatalities on Oklahoma roads and elsewhere, the good news is that the number of fatalities decreased more than 27% in 2013 from where it had been in the years prior. As long as there are any DUI injuries or fatalities in Oklahoma, it’s too many. The team at McIntyre Law, P.C. has dedicated ourselves to the safety and security of the community here in Oklahoma, so it’s our priority to bring you the latest statistics on issues that concern you and your loved ones on a day to day basis. That’s why, for the sixth year in a row, we’re sharing with you our research into the trends and facts behind Oklahoma DUI. Data are from the National Highway Traffic Safety Administration (NHTSA), Oklahoma Highway Safety Office (OHSO) and the Fatality Analysis Reporting System (FARS). 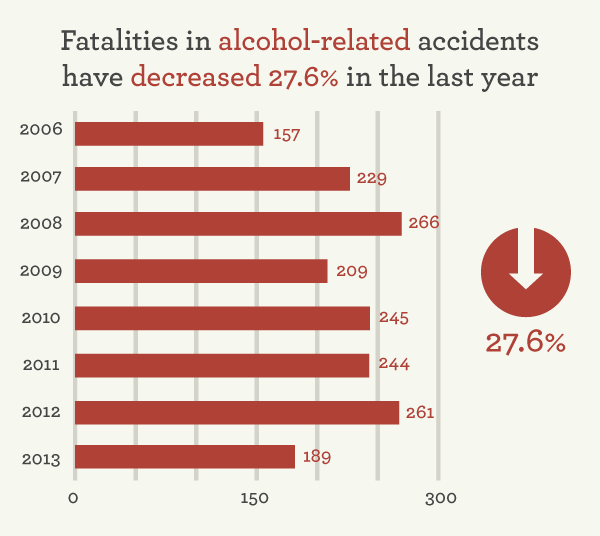 In the chart above, you can see that 2013 shows strong improvement over any year since 2006 with respect to the number of fatalities in alcohol-related accidents. Aside from a slight dip in 2009, the numbers have remained high each year.

However, we should look at not only how many fatalities there were, but also who is most likely to be causing these accidents so that we can try to prevent them. Remaining fairly constant with last year, we see that females make up only about a quarter of drivers in alcohol-related crashes, while three-quarters of these drivers are male. The percentage is similar in looking at driver fatalities in alcohol-related crashes: 81% male and 19% female.

It’s also interesting to note that more alcohol-related crashes happen on Saturdays and Sundays than any other days of the week. Our studies show that this has been the pattern for at least the past six years.

Driving conditions are also a significant factor when it comes to alcohol-related crashes. Consistent with last year’s report, the largest number of alcohol-related crashes in 2013 occurred in dark (unlit) areas, with the numbers of crashes in daylight or dark-lit areas being close to equal. We can ascertain, then, that anything that complicates driving under normal circumstances (like poorly lit roads) will be an aggravating factor for someone who is driving under the influence of alcohol or another substance.

Though there have been ups and downs in the figures between 2006 and 2013, there is some positive news in the statistics: The number of crashes is down 42% and the number of injuries down 57%. It doesn’t diminish the fact that the number of fatalities is up 17%, but fewer crashes is definitely a good thing, especially with the dramatic drop in fatalities from 2012 to 2013.

Fatalities in Alcohol-Related Crashes by Population, 2006-2013

Increases and Decreases in Alcohol-Related Fatalities by County, 2011-2012 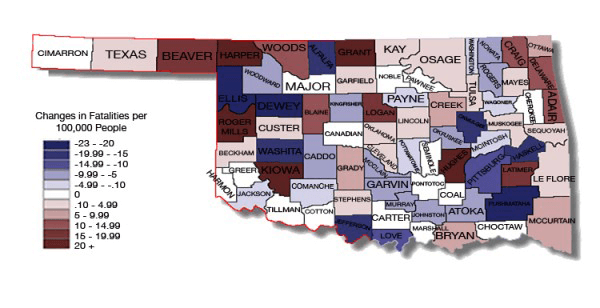 Counties with the Greatest Increase in Fatalities, 2011-2013

The number of fatalities per capita increased the most dramatically in Johnston, Ellis, Greer, Pontotoc and Craig counties.

Counties with the Greatest Decrease in Fatalities, 2011-2013

On the flip side, the greatest decrease in per capita fatalities from alcohol-related crashes were Roger Mills, Grant, Beaver, Harper and Dewey counties.

Ultimately, DUI and alcohol-related crashes remain a significant problem in Oklahoma. It will continue to be a problem as long as people fail to heed warnings from law enforcement, public service announcements and their loved ones about drinking and driving. Oklahoma is already taking steps to prevent repeat DUI offenders, but the problem must be solved by each driver’s taking personal responsibility. Particularly if you’re a parent of teenagers, it’s crucial that you impress upon them not just the risks of driving under the influence, but also distracted driving, which is a huge contributor to teen road fatalities. Teach your kids about responsible driving, but also about being a responsible passenger. Teens are often willing to take risks that more experienced adult drivers would not, and they might not understand as well the way that alcohol or other substances affect their bodies and their driving skills.

Of course, whether it’s a holiday, other special occasion, or any time, there are precautions you can take to minimize the risk of getting behind the wheel while under the influence, and to minimize the likelihood that a guest in your home would do so.

At McIntyre Law, it’s our mission to improve safety and protect the rights of Oklahoma car accident victims. We share these statistics in order to help raise awareness of this very important issue. If you or a loved one has been injured because of a drunk driving accident and you need the help of a personal injury lawyer, please contact us for a free, no-obligation consultation.